GATLINBURG, TN (WMC) –Gatlinburg, Tennessee, and surrounding areas are being evacuated due to wildfires in the Smoky Mountains. Gatlinburg and Pigeon Forge have called evacuations as ash pours from the sky over the cities.

TEMA said hundreds of homes were damaged or destroyed as of Tuesday morning. An estimated 14,000 visitors and residents have been evacuated.

According to TEMA, four people have been hospitalized in Nashville and Knoxville with burns.

An emergency notification was issued by the Sevier County Emergency Management Agency.

“The City of Gatlinburg and nearby communities are being evacuated due to wildfires. Nobody is allowed into the city at this time. If you are currently in Gatlinburg and are able to evacuate…evacuate immediately and follow any instructions from emergency officials. If you are not instructed to evacuate…please stay off the roads.”

Video posted on Twitter shows the Park Vista Hotel in Gatlinburg with flames rising outside the windows. Multiple news stations in the area reported that people were trapped inside the hotel, but according to WVLT, everyone was evacuated from the building.

The fires started last week, but another fire started Monday and became stronger throughout the day due to high winds. Great Smokey Mountains National Park officials called the fire erratic and unpredictable.

Late Monday night and early Tuesday morning, TEMA received reports that the destination Ober Gatlinburg had been destroyed in the fire. However, a video on the attraction’s Facebook page shows that the facility is OK as of Tuesday morning.

Residents in the area can use the Red Cross Safe and Well website or Facebook’s Safety Check to indicate they are safe.

According to WBIR, over 100 first responders from various agencies are working to put out the massive blaze. The National Guard has also been called in to help with the fire.

Guardsmen with the Tennessee Army National Guard 1/230th in Jackson, TN, have been assisting emergency responders with fighting the fires since they broke out.

Tennessee Emergency Management Agency (TEMA) said there have been no fatalities. One man was treated for a burn while evacuating. There was also a report of minor injuries from an accident involving a fire truck.

According to TEMA, State Hwy 441 heading to Gatlinburg is closed, except for emergency traffic. The opposite direction is open for people evacuating.

As of 2 a.m. TEMA officials said 30 structures were on fire in Gatlinburg, including a 16-story hotel on Regan Drive and the Driftwood Apartments, which were reported to be fully involved.

A number of residents took to social media to post videos of their evacuation.

WARNING: These videos contain profanity that may not be suitable for all viewers. 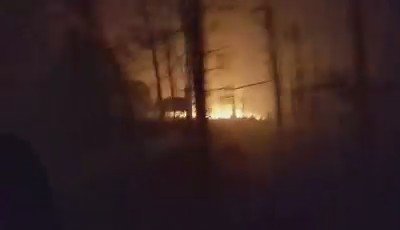 Emergency officials are asking people to stay off of their cellphones except for emergencies.

According to the National Park Service, the Smoky Mountains hosts millions of people each year. There were over 10 million visitors to the park in 2014, making it one of the most visited areas in the nation.

Rain moved through the area Monday night, leaving many to hope for a watery respite to calm the flames. Despite this, the fires raged on. Sevier County EMA said an enhanced fire danger was in effect Monday from 9:57 a.m. until 8 p.m. EST.

Tennessee Senator Bob Corker said he was monitoring the wildfires and asked everyone to pray for the area.

Despite numerous reports that the fire had reached the popular tourist attraction Dollywood, the theme park sent out a statement saying it had not sustained any damage.

NBC’s Kurt Chirbas tweeted the statement which read, in part: