Changes in the works at The Magic Kingdom’s Tomorrowland, as reported this morning by our friends over at Theme Park Tourist. Some of these are almost completed (#1), some are in progress (#2) and some is still rumor (#3). We at Destinations With Character are especially interested in your thoughts of #3, the rumor of Wreck It Ralph coming to Tomorrowland.

While Magic Kingdom lands like Frontierland and Fantasyland are timeless and don’t really need periodic updates for their theme to stay current, one big problem that Disney parks have always faced is how to keep up with the future at Tomorrowland.

Though Disneyland in Anaheim as well as Disneyland Paris have taken some very different approaches towards keeping the future in Tomorrowland, it looks like it is now the Magic Kingdom’s turn to re-invent the future with some new and rumored changes coming to this land in the next few years. And interestingly, it looks like the newest version of the world of Tomorrow at the Magic Kingdom will begin with a whole new look:

1. The Carousel of Progress gets a bright new paint job

Back in 2014, a project to bring a new color scheme to Tomorrowland began, as the entrance to the PeopleMover attraction as well as the Astro Orbiter were outfitted with a bright and shiny metallic paint job. However, in 2015 all progress on this project stopped, with only the very center of Tomorrowland sporting the retro-cool paint job. However, after nearly two years it looks like Disney has finally picked this project back up, and has started with one of Tomorrowland’s most-loved hidden gems: the Carousel of Progress.

As you can see above, this attraction now features bright, solid, eye-catching colors, and no longer has the drab washed out gears that were painted on this attraction for more than a decade. Though we can’t be sure, it looks like this new, bold color scheme may actually be attracting more guests to this classic attraction, as the Carousel of Progress actually had a line during a recent trip we took to the Magic Kingdom!

2. Tomorrowland’s entrance is in the process of getting an upgrade too

Though you actually have to walk through Tomorrowland to see the Carousel of Progress’ new paint job, even more color changes are coming to Tomorrowland, and these will be immediately visible right from the front of this land. The top of the PeopleMover (next to the Tomorrowland Terrace restaurant) has now been painted purple, and the rocks that surround the entrance of this land are getting primed and painted as well. The picture above was taken a few days ago, and you can compare it with the previous color scheme, which you can see below:

Work is continuing on this project, and while most of the rocks near the entrance and in the water currently sport what seems to be a rust-inspired look, this is probably not the final color for these rocks, and is likely acting as a primer. 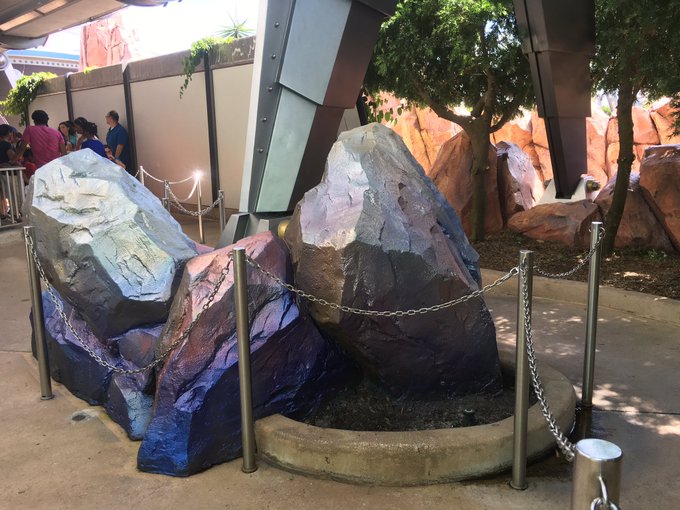 Eagle-eyed guests who have walked around the front of Stitch’s Great Escape have spied some shiny metallic purple rocks, and many have theorized that these rocks (which you can see in the social media post above) were painted to “test” this dramatic new color before its wide roll out around Tomorrowland’s entrance.

While we don’t know exactly when this project will be completed, it looks like the gateway to the world of Tomorrow is going to look a whole lot different in the very near future.

3. Rumor: Wreck-It Ralph coming to Tomorrowland in the very near future

It may seem hard to believe, but it has been nearly a decade since Tomorrowland has gotten a new attraction (its last addition was the Monsters Inc. Laugh Floor, which opened in 2007). However, according to multiple sources, that could be changing very soon, as rumors are swirling that a new attraction based on Wreck-It Ralph could be coming very soon to Tomorrowland.

Though it’s a bit of a thematic stretch (Wreck-It Ralph was largely based on the world of retro video games from the 1980s and 1990s, after all), this new attraction would allow guests to use VR technology to virtually “race” against one other in the world of the Sugar Rush video game that is presented in the film.

While nothing has been confirmed yet, inside sources are saying that this new attraction will take over the space currently occupied by everyone’s least favorite attraction, Stitch’s Great Escape, which is now rumored to be closing as early as this fall to make way for this untitled experience. However, it could be some time before this new attraction opens as rumors indicate that the two theaters inside Stitch’s Great Escape will need to be extensively remodeled to make way for a new seating style that would include the virtual reality technology that will transport guests “inside” the virtual world of Wreck-It Ralph‘s Sugar Rush video game.

Slashfilm reports that this new attraction will use motion-simulator go-karts that come equipped with virtual reality headsets. During the ride, which is estimated to be three- to four-minutes long, guests will actually race against opponents, using steering controls on their kart. They also report that this attraction will be designed with the ability to be updated in the future (kind of like Star Tours) which suggests that it may be open before Wreck-It Ralph 2‘s 2018 premiere date.

Now while this all sounds good in theory, Slashfilm also points out that this ride configuration would only allow for about two dozen guests to experience the ride per five minute cycle, which would result in a pretty low hourly capacity and could drive up wait times if this rumored new experience proves to be popular.

Between this new rumored attraction and the very real aesthetic changes that are happening around this land, it looks like Tomorrowland is finally ready to get the attention this land so desperately needs. How do you feel about the Magic Kingdom’s version of Tomorrowland? What changes would you make to help realize the world of tomorrow, today inside this park? Let us know what you think of all these changes (and when you think they’ll be complete!) in the comments below!