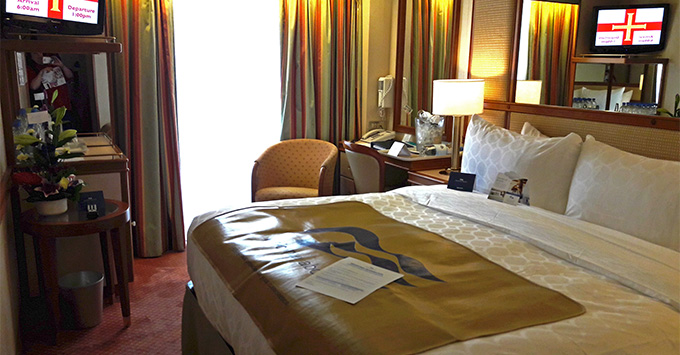 Princess Cruises is showing off its 13-year-old Caribbean Princess, after the ship underwent a multimillion-dollar refurbishment that welcomed several new and revamped spaces, and outfitted it for Princess’ Ocean Medallion program (wearable technology that acts as a virtual concierge). Cruise Critic is onboard testing out all the additions — with the exception of Ocean Medallion, which won’t be available to passengers until March 2018. (Learn more about what to expect, here.) Check out our thoughts on the changes, so far. 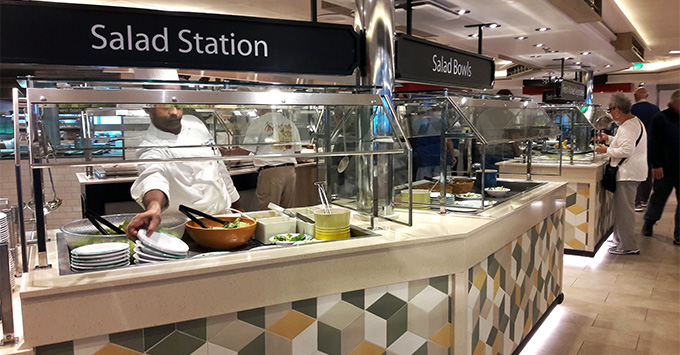 Princess debuted its “luxury bed” collection on Ruby, Emerald and Coral Princess back in February 2016, and has been slowly rolling it out to the fleet ever since. During Caribbean Princess’ 2017 dry dock, Princess swapped out 3,200 beds, so every cabin now offers the new mattress and linen combo that together make up the “luxury bed.” We think it should be called the magic bed, because every night we’ve slept like a baby nestled in luxurious softness.

In keeping with the at-sea trend that is moving away from single-line buffets, Caribbean Princess replaced the old Horizon Court with the World Fresh Marketplace, composed of some dozen food stations. The setup allows for both a greater variety of food offerings, and cuts down on congestion. We love all the stations, particularly the salad stations with lots of ingredients to make your own, as well as the soup station and “specialty” island, which always has gluten-free treats including breads, fruit and desserts.

Knowing that nothing makes a cruise ship look more tired and old than a faded Lido Deck with ratty deck chairs and scuffed tables, Princess invested a bunch in renewing the look of Caribbean Princess’ Lido Deck with all new loungers, as well as tables and chairs (in a festively bright tangerine color) for dining at the newly refurbished Slice pizza counter, The Mix (formerly Blackbeard’s Bar) and just-added Salty Dog Grill, which replaced the old Trident Grill. It gives all of Deck 15 a crisp, new feeling.

Full disclosure, we haven’t been to the newly revitalized Sabatini’s on Caribbean Princess, but we’ve met several people who have and they’ve all raved about it (some have even been back two times, and we’re only on day six of a highly port-intensive 12-day cruise). Caribbean Princess is the first ship in the fleet to get the new Sabatini’s menu, which was created in partnership with Chef Angelo Auriana of Los Angeles-based The Factory Kitchen and offers a combination of antipasti and pasta dishes. We can’t wait for our turn to dine here in a few days’ time. 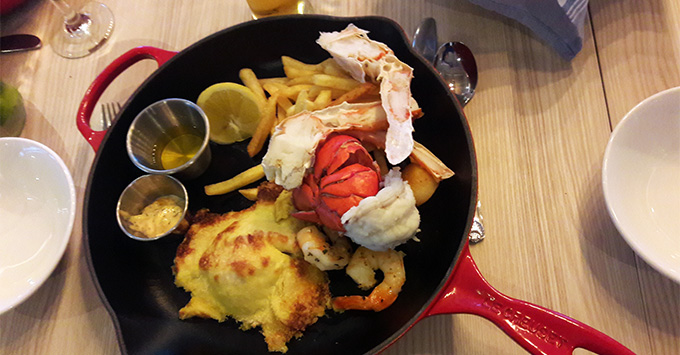 Other than the addition of the luxury beds and the replacement of all in-cabin artwork, none of the cabins onboard Caribbean Princess were changed during the ship’s dry dock. This means the carpets are a bit worn, the showers are still too tiny with clingy shower curtains, and — most importantly — the rooms still have just two 110 voltage power outlets (near the desk, not the bed) and no USB charger. For a ship that spends part of its time in Europe, the lack of at least one easily reachable 220V outlet is noticeable. (You can get an adapter from the Passenger Services desk if you ask for one, and there is actually a hidden 220V outlet behind the bed, requiring passengers to pull the bed out and squeeze behind it to reach it.)

With the name “Steamers Seafood,” one might expect to discover a menu fit for a seafood lover. Instead, it’s a bit of a disappointment with a menu that’s quite limited. There are just two appetizer choices and four main entree choices, all of which have shellfish — leaving anyone who can’t eat shellfish for dietary or religious reasons out of luck. (The chef will make the crab-stuffed flounder without the crab, but it’s drowned in Hollandaise sauce and not nice at all.) During a dinner at the restaurant with several other reporters and their guests, the general response to the meal ranged from “eh” to “not good.” We’re not sure whether passengers feel the same, as so far the restaurant has been mostly empty each night. The ship’s hotel director told us this has more to do with the ship’s port-intensive itinerary and that anecdotally, Steamers has had a good reception.