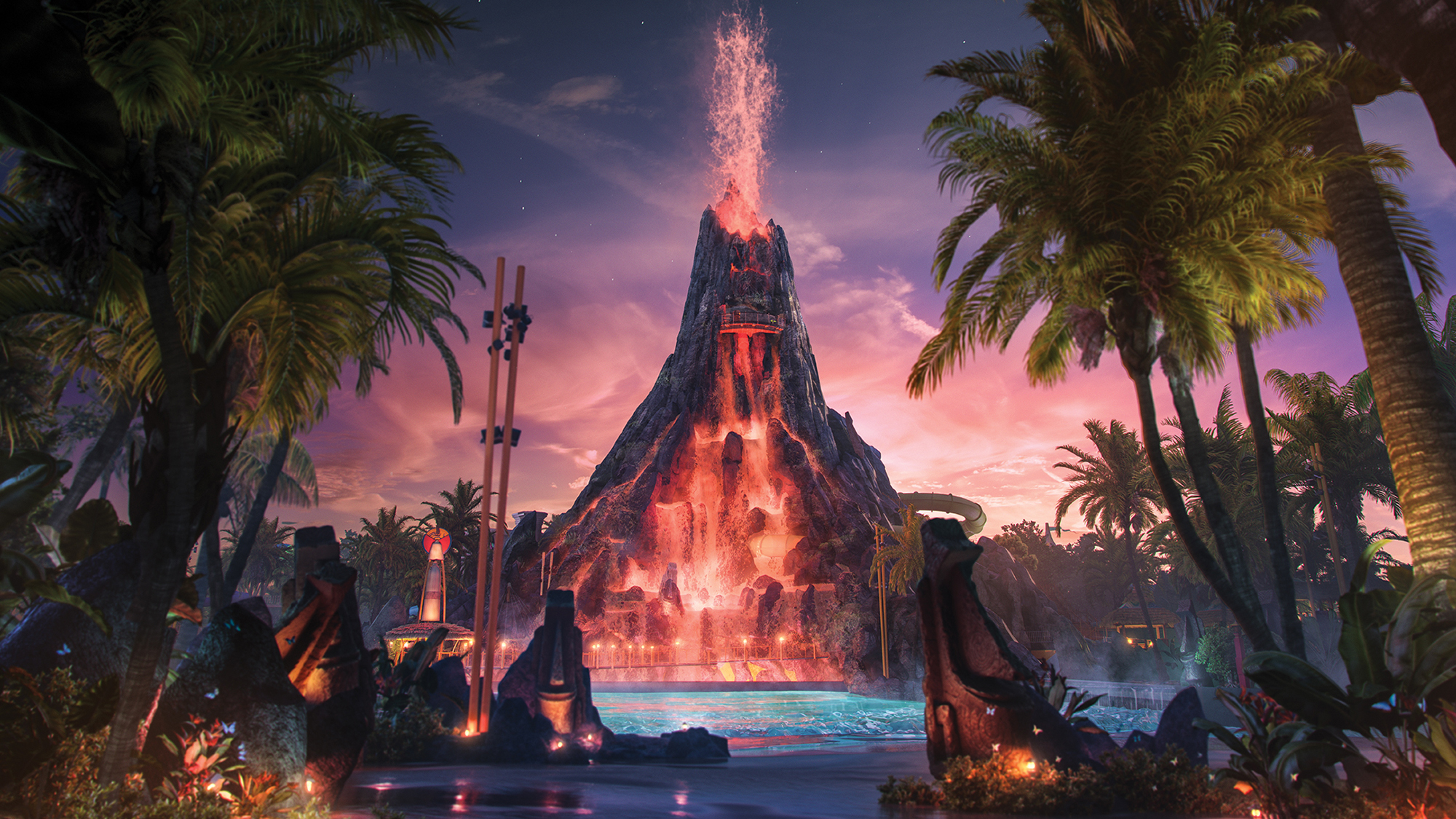 A rendering of Volcano Bay at night.

NEW YORK — Universal Orlando’s Volcano Bay will open on May 25, and officials at a media event here said it will be more than a water park — so much so that they’re calling it the resort’s third theme park.

“‘Water theme park’ was a very conscious choice, a very specifically chosen term, because what we’ve done with this experience is elevate what our guests have come to think of as the traditional water park experience, which this is not,” said Universal Creative’s creative director, Jason Surrell.

“We called it a water theme park because there is a depth, no pun intended, to the storytelling, the attention to detail, and the execution of some of the physical experiences that go far beyond anything that has come before it.”

The park and its four themed areas are based on the story of the Waturi, an ancient tribe from Polynesia who were seafaring travelers and visited multiple islands on their outrigger canoes. They finally settled in an atoll, Volcano Bay, which features the 200-foot Krakatau volcano in its center.

“What that allowed us to do was bring to life the South Pacific and Polynesia without trying to replicate any one location or any one culture, so this is a cool melange of different visual inspirations from the region, and it didn’t marry us to any one thing,” he said.

The main area of the park is Krakatau, which features speed slides and some of the more thrilling experiences, like the Krakatau Aqua Coaster. The coaster uses linear induction motors, technology Surrell said Universal employs on its more traditional roller coasters, to move guests not only down, like most would expect on a water ride, but up and all around.

“It’s really more akin to a traditional theme park attraction than anything you would find in a water park,” he said.

Volcano Bay also consists of the Wave Village, featuring a multi-directional wave pool; the River Village, which holds child and toddler activities, as well as a winding river experience; and the Rain Forest Village, home to raft slides, speed slides and a whitewater rafting experience.

Guests will wear TapuTapu wristbands, technology enabling them to avoid standing in lines at attractions. Guests tap the band against a totem outside a ride, then receive a notification when they can return to ride. The TapuTapu bands also trigger special effects throughout Volcano Bay.

Universal is also getting ready to open its newest ride, Race Through New York Starring Jimmy Fallon, on April 6 in the Universal Studios Florida park. Surrell said the ride is being tested this week and is in the “home stretch” before opening to the public.

The ride features a mock-up of Studio 6B — the filming location of “The Tonight Show” at NBC Studios inside 30 Rockefeller Plaza — inside a moving theater. Guests wear 3D glasses and speed through New York’s streets, where they will see many iconic landmarks and familiar faces, including Jimmy Fallon and his band, The Roots. The theater seats 72.

“It’s a great commercial for New York City and it really shows how awesome and colorful and exciting and electric the city is, and I think you’ll be impressed and you’ll want to do it again,” Fallon said.

The new ride also features Universal’s Virtual Line experience, where guests receive a time to come back and ride the attraction through either kiosks outside the ride or the Universal Orlando Resort App.

Between TapuTapu and the Virtual Line experience, Surrell said that Universal is looking to elevate the guest experience inside the parks.

“We have removed one of the biggest negatives in their day,” he said.

Surrell said he envisions a future where “decades down the line, we’ll have a generation that won’t even know about standing in line. We will have evolved out of that, and I think that’s the journey we’re on.”

He added, “Once the genie’s out of the bottle with this sort of thing, guests will come to expect it.”