Here’s a great article from The Los Angeles Times….. 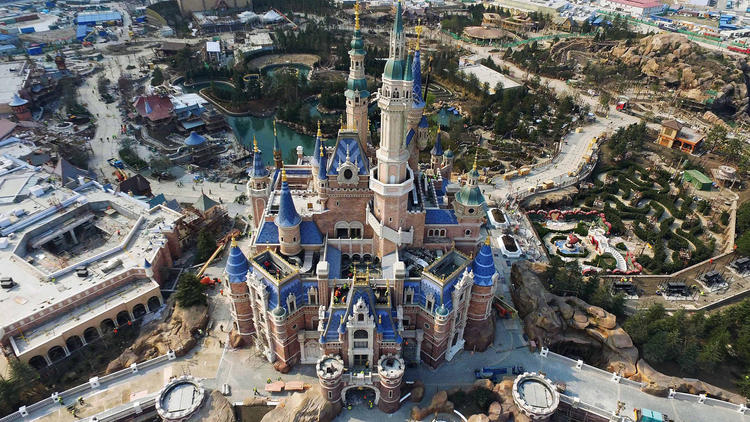 Even before Walt Disney Co. opened Euro Disneyland outside Paris in 1992, French intellectuals called the park a “cultural Chernobyl,” workers protested the Disney dress code and neighbors complained that the park’s train whistles provoked their dogs to bark and geese to honk.

But Paris came to embrace its new neighbor and now the park attracts 10.4 million people a year, more than the number of visitors to the Louvre museum or the Eiffel Tower.

On June 16, Disney will open its biggest and most expensive international resort — a nearly 1,000-acre, $5.5-billion development in Shanghai — and company executives know the challenges of trying to take the Disney magic abroad. An opening-day misstep or cultural faux pas at the Shanghai Disney resort could dent Disney’s hugely popular brand.

But if the risks are high, so are the rewards.

If it proves a hit, Shanghai Disney will add momentum to the Burbank entertainment giant’s efforts to turn China’s 1.4 billion citizens into more voracious consumers of Mouse House merchandise and films.

Disney’s target is the country’s upper middle class, which is forecast to double to 100 million by 2020, according to the Boston Consulting Group. The Chinese tourism industry represents $610 billion in spending in China and abroad, and the Chinese government predicts that it also will double by 2020.

Customers like Han Li, a data analyst, and her husband, Yu Lei, a bank worker, both 32. The couple, who have been to all five of Disney’s resorts, plan to attend the grand opening in Shanghai and stay five days.

“It’s not that we don’t have other travel plans,” Han said, “but other plans need to give way to Disney plans.”

The joint venture behind Shanghai Disney — Disney holds a 43% stake and the state-owned Shanghai Shendi Group owns the rest — insists that it is well prepared for the grand opening of the Shanghai Resort, which is nearly twice the size of the Anaheim Resort (which includes Disneyland and California Adventure, three hotels and the Downtown Disney shopping, dining and entertainment complex).

Over the last month, Shanghai Disney held previews to work out the kinks, with some 1 million people visiting the park’s six themed lands encircling the Enchanted Storybook Castle, a shopping district and 99 acres of gardens, lakes and parkland.

“I think that will make a big difference,” said Marty Sklar, former vice chairman and principal creative executive for Disney’s Imagineering team during Euro Disneyland construction. “They are trying to become part of the culture instead of trying to interpret the culture,” said Sklar, who retired from Disney in 2009.

For example, Main Street U.S.A. has been ditched in favor of a large garden featuring Disney versions of the Chinese zodiac animals and a Mickey Avenue that will help familiarize Disney newbies with some of the company’s classic characters. Designers have added more seating at restaurants after finding that Chinese guests linger longer over meals, and incorporated more live entertainment after realizing that many Chinese patrons like those shows as well — or better — than adrenaline-inducing rides.

Among the other innovations and adaptations slated for the resort in the world’s most populous country are rigid barriers to encourage more orderly queuing, wider thoroughfares than in other Disney parks and extensive picnic areas to appeal to extended families with grandparents in tow. There’s also a mobile phone app that delivers updates on wait times and can warn prospective guests to stay away if the park is at capacity.

Disney faces steep competition in China, where as many as 60 theme parks are under construction or being planned, including projects by Universal Parks & Resorts, Six FlagsEntertainment and Dalian Wanda Group, one of China’s biggest conglomerates.

Disney doesn’t disclose capacity or attendance figures for its parks, but Shanghai Shendi has projected that 10 million to 12 million people will visit the park in the first year.

There is room for as many as three Disney parks at the Shanghai site, and the complex could eventually attract up to 30 million attendees annually, according to Entertainment + Culture Advisors, a consulting group.

Liu Zhaohui, co-founder of the Beijing-based travel company TripVivid, estimates that annual revenue from the Shanghai resort could reach $3.7 billion.

Disney has spared no expense to make sure Shanghai Disney doesn’t suffer the same setbacks as previous projects, said Edward Marks, co-chief executive of the Producers Group, a theme park consultant that has worked on Shanghai Disney.

In 2014, Disney and Shanghai Shendi announced that they were increasing their investment in the park by $800 million to $5.5 billion.  Last year, the companies pushed the opening date back a year to 2016.

Some observers speculated that the extra investment and revised timeline were the result of cost overruns and other problems, but the companies say they simply wanted to expand the number of attractions that would be ready on opening day.

“The phase one opening of this park will be the best of the industry,” Marks said.

With the opening of Euro Disneyland — later renamed Disneyland Paris — Disney faced strong resistance from French activists who were leery of an invasion of American culture served up by Mickey Mouse and Dumbo the flying elephant.

The park, owned by Euro Disney SCA, a public company in which Disney holds an 82% stake, anticipated 11 million visitors a year but attracted only about 9.8 million in the first full year. It didn’t help that a recession hit Europe at about the same time the park opened.

Disney made adjustments to appeal to the French, such as lifting an alcohol ban and reverting Disney characters with French origins to their original names. The castle of Sleeping Beauty is known as Le Chateau de la Belle au Bois Dormant.

“We did bend to some of it,” said Mickey Steinberg, executive vice president and chief operating officer of Disney Imagineering, who retired in 1994. “We did serve wine.”

But Steinberg said his biggest problems had more to do with meeting construction deadlines and working with foreign crews under restrictive French guidelines.

“Disney didn’t have the experience their people have today,” he said.

When plans were launched about a decade later to build the next international theme park in Hong Kong, Disney executives took steps to avoid cultural blunders. In that project, Disney has a 47% stake in the joint venture with the Hong Kong government.

Disney employed feng shui experts to pick the opening date for Hong Kong Disneyland — Sept. 12, 2005 — and to improve the theme park’s chi or positive energy. In Chinese, the number four is considered bad luck, so there are no fourth-floor buttons in the elevators at the hotels in the Hong Kong park.

Marks said the park was much too small — only 68 acres — and the attractions were not the high quality of those in the Anaheim or Florida parks.

Perhaps Disney’s smoothest theme park opening outside of the U.S. was its very first in Tokyo in 1983. That project was built by Disney but operated by a Japan-based leisure and hospitality company, Oriental Land Co., with a licensing agreement with Disney.

The 115-acre park was built with near-identical attractions to those in Disneyland, and last year hosted 16.6 million visitors, according to Aecom and the Themed Entertainment Assn.

“The community wanted Disney there,” said David Koenig, the author of several books about Disney.

Steinberg predicted that Disney’s biggest problem at the Shanghai park will be managing crowds. About 330 million people are estimated to live within a three-hour drive or train ride from Shanghai Disney.

“They are going to have larger rushes of crowds than they have ever witnessed,” Steinberg said.

Whatever the challenges, Disney – with 10 other parks in its portfolio – has more practice at building abroad than any other theme park operator.

“Disney has learned a lot from the issues of Hong Kong and Paris,” said Naveen Sarma, a Standard & Poor’s credit analyst who follows Disney. “And so they have taken a much more hands-on approach” with the Shanghai park.

Nicole Liu and Yingzhi Yang in The Times’ Beijing bureau contributed to this report.